Hannah Palmer Looks Like A Buxom Barbie In Pink Lingerie 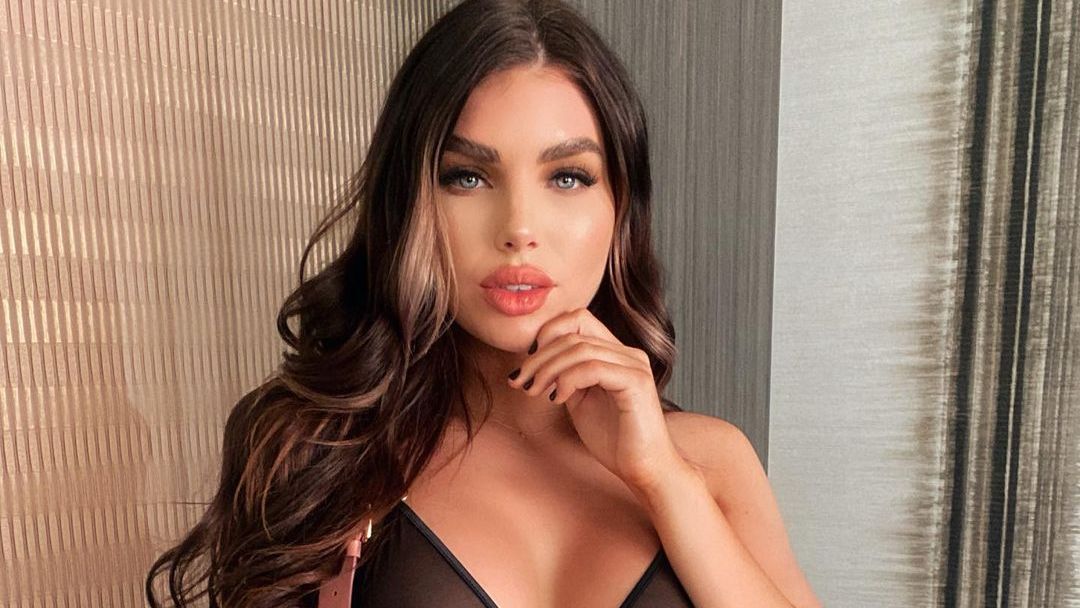 Australian bombshell Nicole Thorne rang in the new week on Monday with a sultry share for her 1.5 million followers on Instagram. The 30-year-old model brought some serious heat to the app by posing in sexy lingerie, driving fans wild with a smoking-hot set courtesy of Fashion Nova.

The brunette beauty went for a black lace look, flaunting her sensational curves in a three-piece set that hugged her figure in all the right places. Scroll through to see the captivating shot that earned her more than 5,580 likes in just one hour. 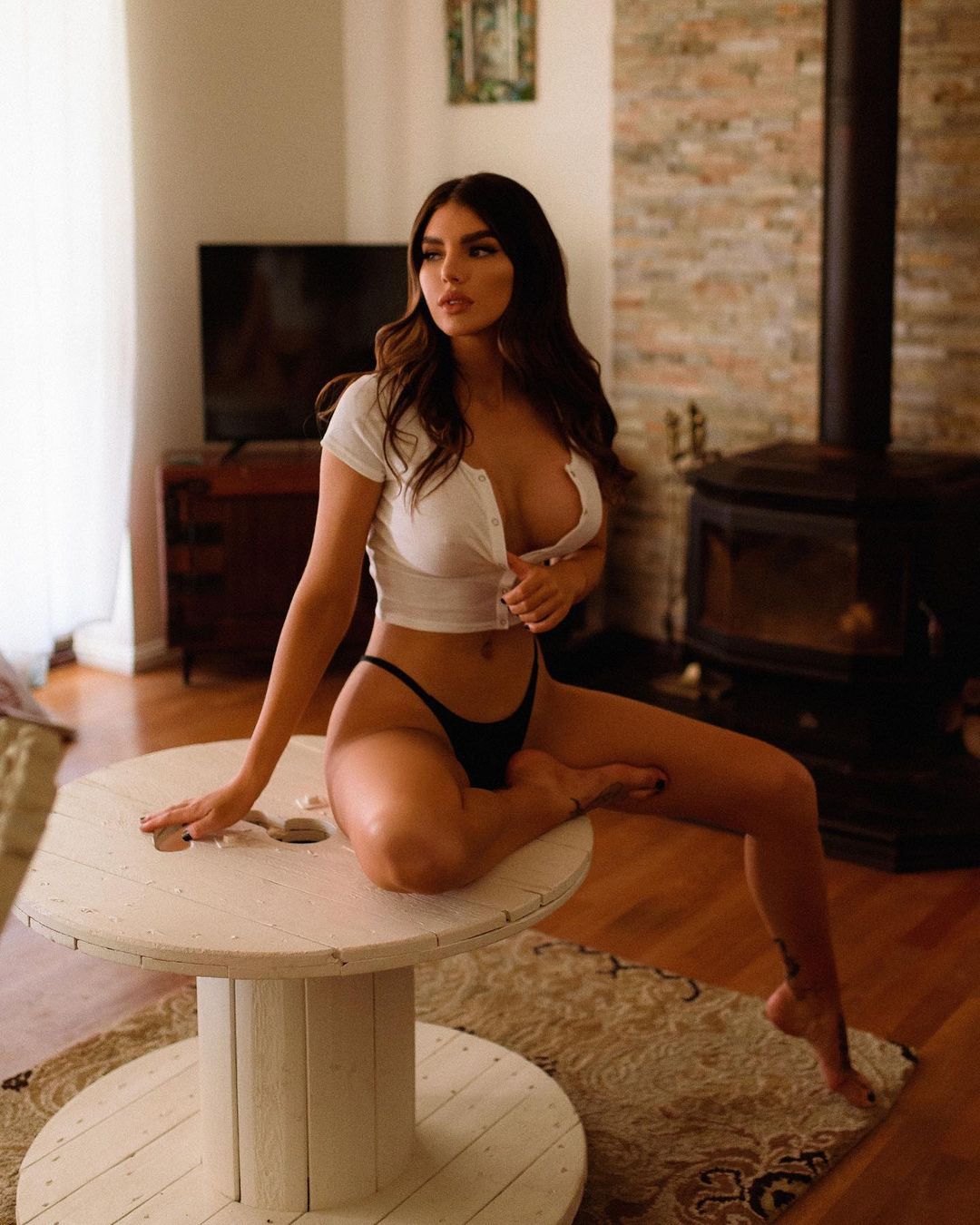 Nicole put her busty cleavage on show in a balconette bra that did favors for her buxom figure. It had scalloped cups complete with underwire details that gave it a sexy push-up effect. The underband sported the same chic trimmings, extending a little over her abs to form a flattering v-shaped pattern.

A glimpse of her toned midriff was visible between the top and a thick garter belt that clung tightly to her body. While the bra was crafted out of a solid fabric, the garter was see-through. It extended to just below her ribs, creating the illusion of cutouts as it nearly reached the bra. It covered Nicole's entire midsection and stretched over her hips, accentuating the stunner's hourglass shape. Keep scrolling to see the tantalizing look. 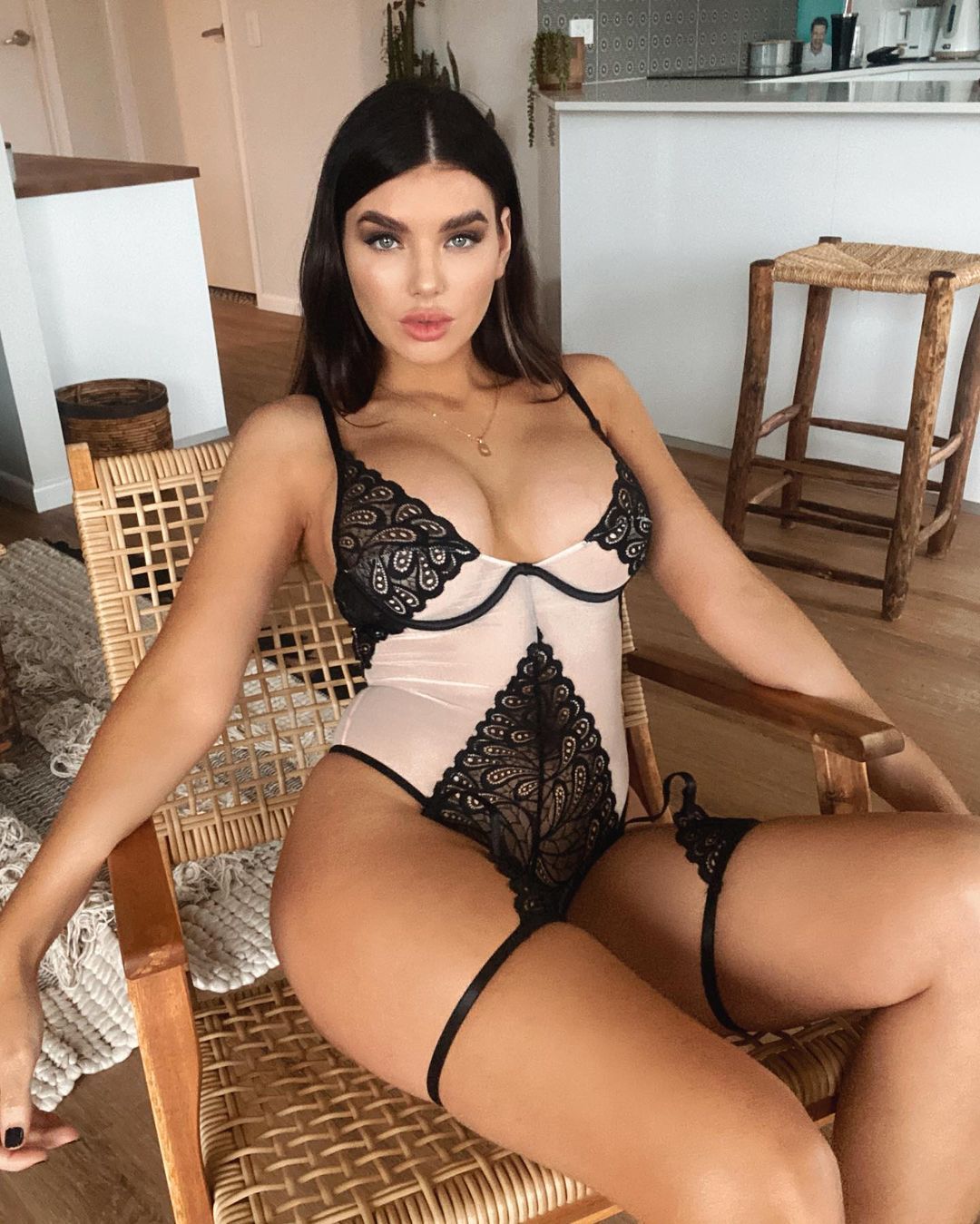 Although the sexy design certainly played its part in arousing fans' interest, what made the look unforgetable was the inspired combination of elegance and seduction. The daring neckline was balanced out by the wide garter that provided a substantial amount of coverage to Nicole's flawless figure, while also sporting a classy floral print that teased a little skin.

Underneath the garter, Nicole rocked a minuscule lingerie bottom that showed off her hips and thighs. Its spaghetti side straps disappeared beneath the scalloped number, leaving her tummy exposed. It had a teeny triangular front that only covered the bare minimum, arresting attention with its semi-sheer lacy design.

The Instagram sensation coordinated her manicure with her attire and raven tresses. She showed off her chic short nails by grazing her décolletage with her fingertips. As she did so, she gave fans a good look at the opulent band ring on her finger, which added just the right amount of bling to the sophisticated yet racy ensemble. See the seductive lingerie below. 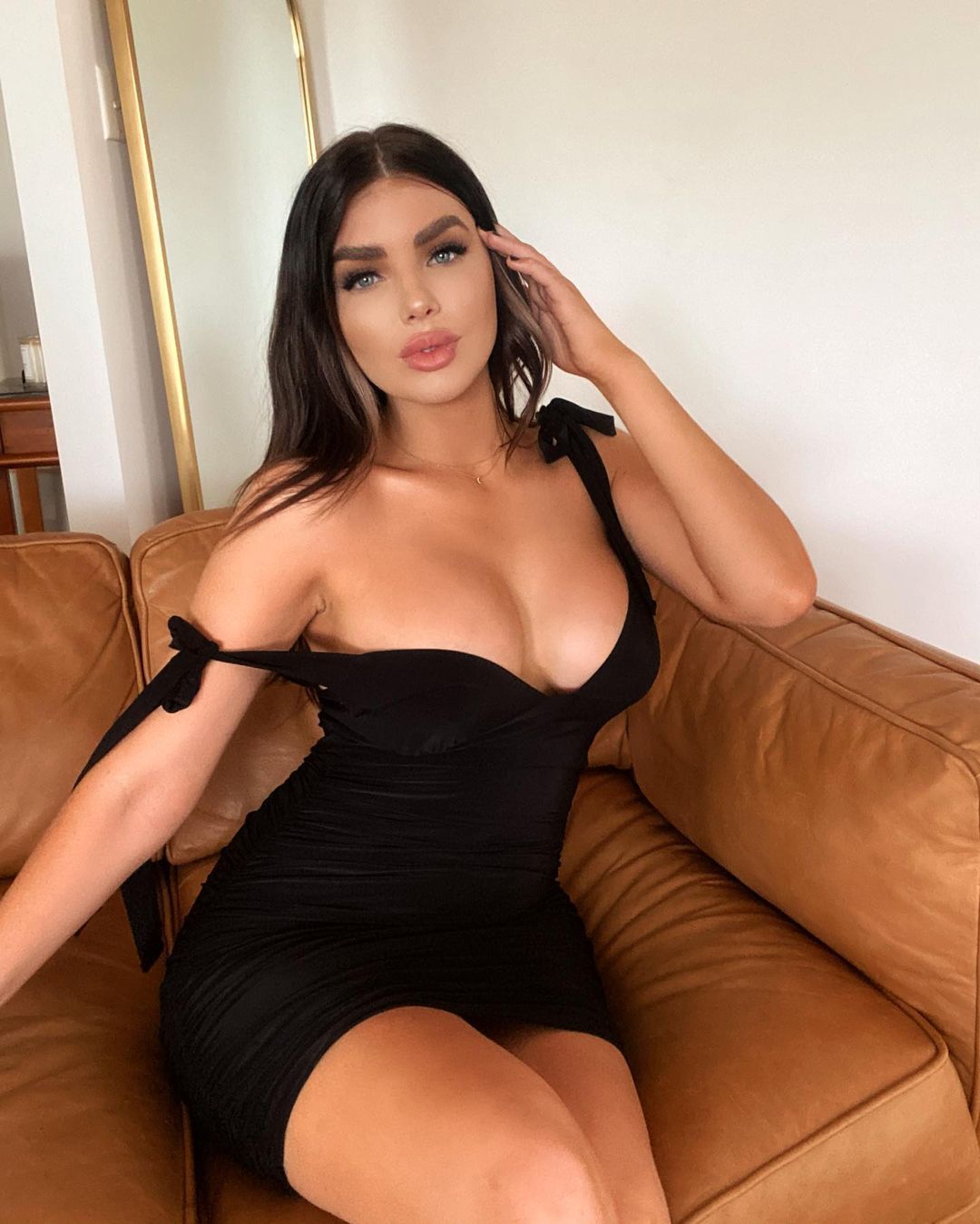 Nicole displayed the eye-popping outfit as she faced the camera with a sultry stare and slightly parted her pursed lips in a provocative expression. The picture, which is embedded below, cut off at the hips and kept all of the attention on her curvaceous core rather than showing her 5-foot-7-inche frame. Her waist was cinched with a narrow string that further emphasized her lean yet sinuous physique. The half-body shot teased her thighs, showing just enough to reveal the outrageous high cut of her panties.

The Aussie knockout appeared to be in the comfort of her own home and was standing in front of a bed. The spacious interior was decorated with earthy tones that gave prominence to her apparel. A geotag identified the location of the photo as Brisbane, Queensland, Australia. 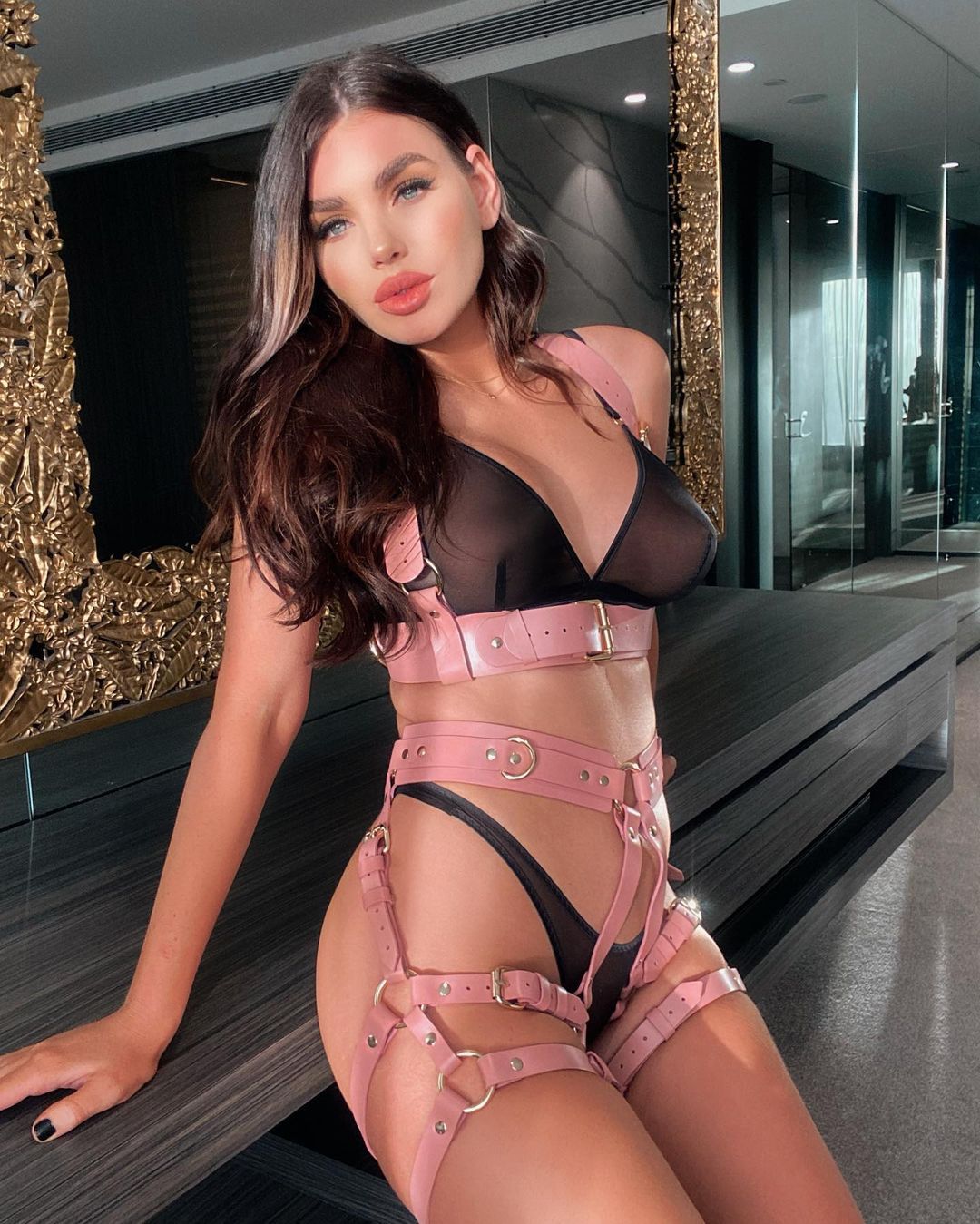 As dedicated fans are well aware, Nicole adores flaunting her voluptuous assets in revealing lingerie. The babe recently set fire to her page with a risqué Valentine's Day look, displaying her tempting curves in a semi-sheer black mesh set and pink leather harness.

While the busty brunette typically models Fashion Nova and Missy Empire designs, on that occasion she expanded her portfolio with a sizzling Marie Mur outfit.

"@mariemur is fast becoming my favourite [sic] thing to wear," she wrote on Instagram.

Sofia Richie Smolders In A White Bikini On Instagram